Dene Elders played an important role in Dene society and were held in high esteem. Their minds contain the time-tested knowledge and wisdom that allow the Dene to survive. They are the link between the past and present, and, through their stories and teachings, they instill yesterday’s ways in the minds of the young.

Elders also functioned as overseers of families. Their broad wisdom was called upon to settle disputes that threatened the peace and harmony of the community. Today, the Dene are turning to their elders again to shed light on an increasingly complex world. 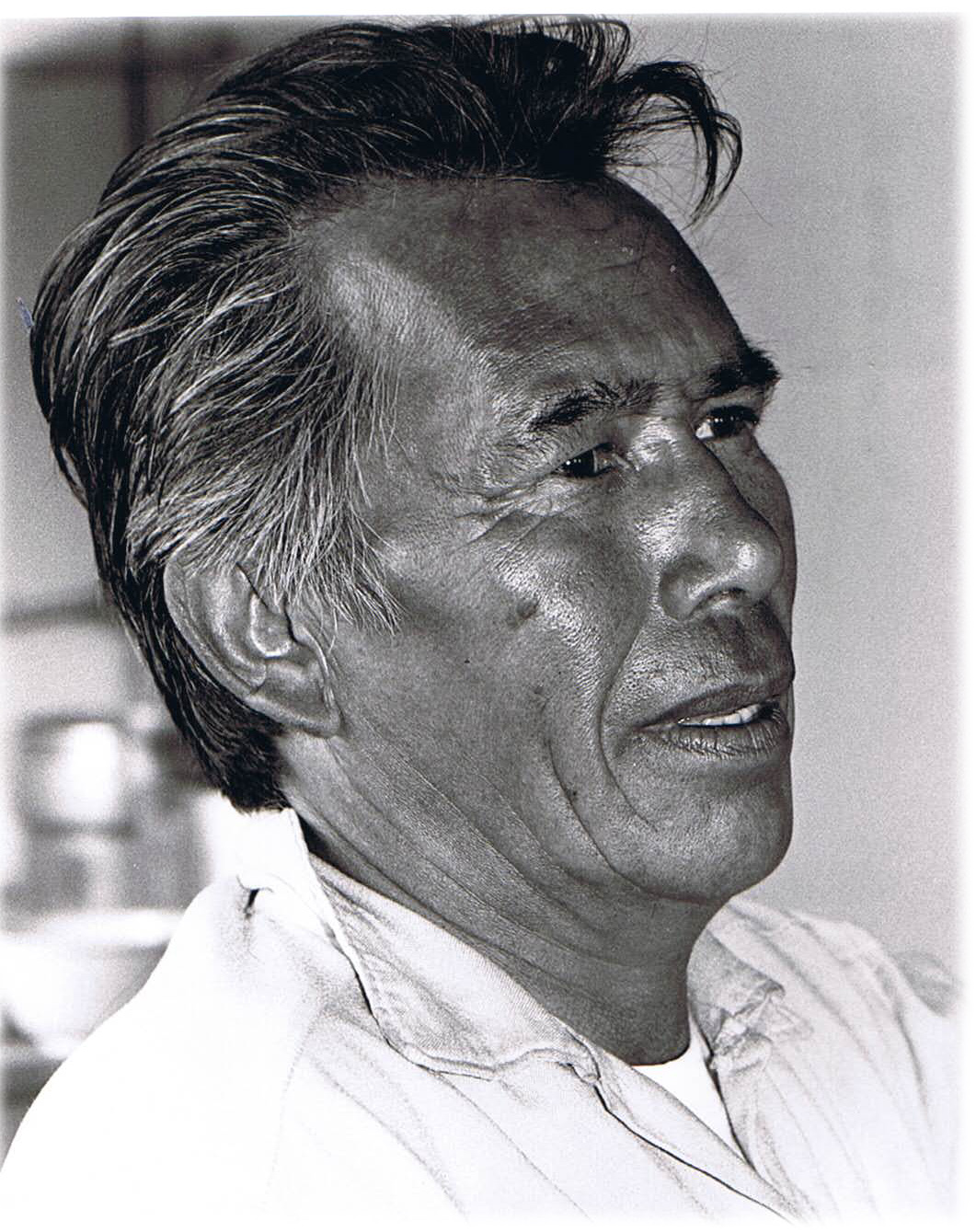 Daniel was born August 27, 1918 to Marie Pascal and Charlie Sonfrere. He was the youngest of eight children. Born and raised around the Hay River area, Buffalo lake area and around Cameron Hills. Daniel spent the majority of his younger years on the land hunting, trapping and fishing. His mother passed in 1929 during the influenza epidemic, His father passed in 1957. Over the years Daniel worked in the forestry industry, as a patrolman and as a commercial fisherman, also spending numerous years on the land. Daniel was married to Anne Sonfrere who passed in 1978. Daniel had three children, Francis who passed at a young age, Raymond and Richard.
During the late 1960’s Daniel was involved in the community by being a KFN Councilor and then in the early 1970’s he became one of KFN’s most significant Chief’s. Daniel was involved in negotiating the Katlodeeche First Nation’s Reservation status with Teddy Bugghins, Pat Bugghins and Jimmy Lamalice. During his time in Office he was a councilor for three years and was Chief for seven years. Daniel was on the Denedeh Elders Council for the Dene Cultural Institute for many years, as long as his health would allow him. He traveled extensively through the north over this time for meetings and assemblies. In 1987, during Pope John Paul II visit to Ft.Simpson, Daniel made a presentation to him on behalf of the Dene People. This August Daniel will be celebrating his 92nd Birthday.

If a Number of white people came into your area without permission, how would you feel about that, your hunting and trapping area? In response, Chief Sonfrere stated:

Quote taken from Aboriginal and Treaty Rights in Canada: Essays on Law, Equality, and Respect for Difference

Judith was the eldest of three daughter’s born to Paul and Madeline Edjericon. Her sister’s were Victorie, the second eldest and Ernestine being the youngest, unfortunately Ernestine passed away at a youthful age. She was born and raised in the Big Buffalo Area. She married George Fabian of Fort Resolution, NT. When She and her husband married, they lived in Fort resolution and because she and her sisters were so close to each other while growing up, she and her husband decided to relocate to the Hay River Reserve in 1929. They had thirteen children, three girls and ten boys. She resided on the Hay River Reserve until her passing on May 6, 1994. Judith was very fluent in Chipewayn and South Slavey.

Judith and her sisters had no brothers, so they had to work just as hard and extensive as anyone else in their family. Judith and her sister’s with their mother and grandmother would have to get materials for the boats when the men went hunting. They would have to collect sap, willow and bark so it would be ready for the men to make when they got back from their hunting excursions.They would also make fish nets and set them in the water with their dad and uncles, there was nothing that Judith and these young women couldn’t do and their parents made sure that there were much disciplined in the traditional way of life and continued that tradition as long as they lived.

While raising her children, she raised them in a similar manner as she was raised, passing down traditional teaching and never yelled or swore at them. she was a very patient, caring, loving and understanding mother. She would often make special clothing for her children from a black and white swan jacket, to beaver parkas, to knitted socks. Her children were always surprised and grateful of the things they would make by hand for them. She always made sure her children were happy, even if they had no money she would find a way to make what her children wanted.

When Judith lost her husband in the early 1950’s and was left to raise her children on her own it was a very difficult time for her, but her sister Victorie would always comfort her and suppport her, in any way possible. They both cherished another and tried to be there for one another in any way possible.

They also enjoyed doing moose hides together. One time in Buffalo Lake the hunters shot two moose and in two days time they stretched, tanned and finished those moose hides by the time everyone was ready to go across the lake, the moose hides were already packed up and ready to go. they were very hard working women that never got mad at each other and enjoyed living their traditional way of life together.

These two sisters made two of the largest families on the Hay River Reserve, and it is to them that we are grateful for. They were a special, hardy breed that had witnessed and lived through much change in the native way of life. We all know what loving friends they were, especially to the ones that were in need of help. They love to give more then receive because they always had a lot of love to share with their friends and family.